Mata Vaishno who was born to a couple in the southern part of India gave up all worldly desires and moved to Trikuta hills to find the answers of her life. Once Mata took the form of a girl and asked Shridhar to organise a big feast for the devotees. Here, Shridhar met Bhairav Nath and also invited him for the holy feast.

Bhairav was all taken away by the aura of little Mata Vaishno and even demanded alcohol and nonveg in the feast. Despite Mata telling him a big no, he didn’t stop and rather started following Mata Vaishno and disturbed her meditation.

Bhairav kept chasing Mata Vaishno consecutively for nine months in the Trikuta hills and followed her into the cave but, Maa quickly opened a path on the other end and escaped. Yet, Baharav was adamant to chase Mata, this infuriated Mata and she finally took her real form to behead the notorious Bhairav’s head.

But, before dying Bhairav genuinely apologised for his misbehaviour and realised the powers of Mata Rani and even asked for her forgiveness. This melted Mata Vaishnavi’s heart and as she is a Maa she had to forgive wicked Bhairavnath.

Goddess Vaishno not only liberated Bhairavnath from the cycle of reincarnation but also gave him a boon. 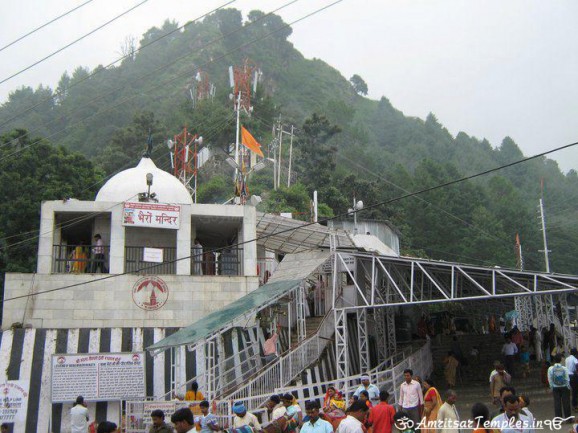 According to which, Mata’s devotees who will visit the Holy shrine for her darshan will have to visit Baba Bhairavnath’s mandir as well, without which their darshan won’t be complete.

Later, a temple was built on the place where Bhairavnath’s head fell and devotees offer alcohol in Bhairav’s mandir.